Here is the latest bike to roll out of the shop. This has been a really fun project because it fused together the fully integrated randonneur bikes I do a lot of with the throwback style mtb that I have also done. Another reason I enjoyed working on it simply came down to the client interaction. The owner, Frank from Detroit, Michigan is a really big fan and highly knowledgeable of handmade bicycles. He has owned numerous handmade bikes over the years, regularly attends shows like NAHBS and the Philly Bike Expo, and has even built a frame during a framebuilding class with Doug Fattic. Frank has also recently started a lugged bicycle appreciation Instagram account called Lugs Not Drugs, featuring both photos he has taken at shows and ones other people send in to him. Check it out if you want see some cool bikes.

Frank came to me with the idea for an adventure bike that would be a good mix of both traditional and modern in regards to both frame construction, aesthetics and components. We shared a lot of common ground in terms of style and parts selection, so I it was almost as if I was making a bike for myself, just in someone else’s size.

The frame is made from a mix of Columbus Zona and Cromor to handle the rough terrain and touring load the bike is intended for. The tubes are joined with bi-laminate construction because it worked better with the geometry than standard lugs while also allowing for more customization and individuality. I also made a custom rack that is based around a large porteur style platform with a modular setup that has the options of running panniers or smaller struts when not loaded. Some of the other frame features include internal brake routing on the fork and frame, easy to use guides for the dynamo light, old school chain slap protector, and a really nice handmade mixed metal head badge by Jen Green featuring a capybara.

The components played a significant part of the design and everything was selected before a single tube was cut so I could determine how each part might effect the geometry and fabrication. The selection was based on using products that were both of highest quality but also robust in construction, and domestically sourced when possible.

Central to the design was the use 650b wheels because of the availability of  quality knobby off-road tires and large volume road tires  that maintain a decent tire radius, unlike 700c/29er options. Tommy from Cutlass Velo out of Baltimore, Maryland built the wheelset with Pacenti rims, Sapim Spokes, White Industries hub in the rear and Schmidt Son28 dynamo hub on the front. The bike can rock either Pacenti Neo-Motos 2.1 knobbies or the new WTB Horizon 47cm slicks with Berthoud fenders.

Around the time we began discussing the bike the Paul Klamper brakes were released and we knew that we needed them on the bike. Not only do they look sharp, they work extremely well and are really easy to setup/adjust. The bike also uses the Paul seatpost which is topped with a Brooks Cambium saddle.  We went with Nitto Dirt Drop handlebars because they would be ideal for both off-road and paved riding in terms of comfort and hand position for braking and shifting. I made a custom stem that was styled after the old school Salsa mtb stems, helping me dial in Frank’s position and add to the aesthetic we were going for.

9 speed Dura-Ace shifters were chosen for the reliability and their ability to run indexed or friction. We went with XTR derailleurs because they worked best for the wide range gearing the bike was running and the chain line the larger tires were dictating. White Industries VBC round things off for the drivetrain, and add another layer to the overall selection of quality parts.

The paint was done locally at da Vinci tandems (where I worked the first year I lived in Denver). The color is 1973 Porsche Leaf Green, with darker green lettering matched to the racks. The color is certainly eye catching but the paint scheme was intentionally kept simple so it wouldn’t detract from the frame detailing. Furthermore, this bike is meant to be ridden, not hung up on a wall like an art piece. There is no reason to baby this bike, the frame and components are robust and by keeping the paint simple there won’t be any crying over spilt milk if it gets scratched as it can easily be touched up.

Ruthworks SF made a set of touring bags for the bike. The bags are made from black camo Xpac, and include a large porteur bag for the top, panniers, and a saddle wedge.  Unfortunately we didn’t have them in time for the photo shoot, but there are a few photo Ely sent me and one snapped at the Philadelphia Bike Expo that we displayed the bike at last weekend. I will definitely post some more photos of the bike loaded up once Frank has done some proper adventuring on it. 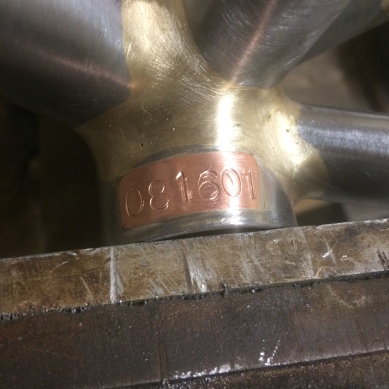 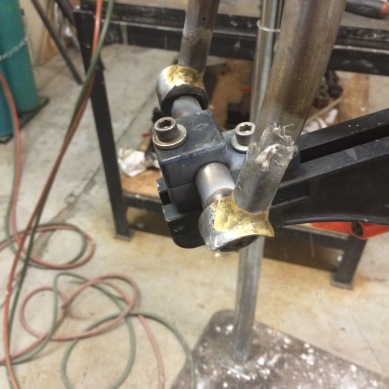 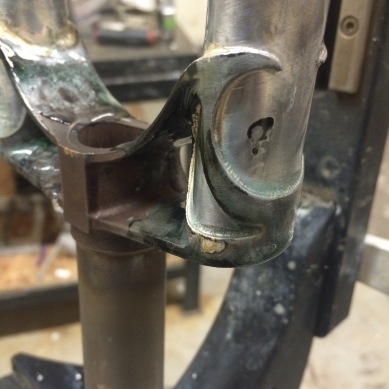 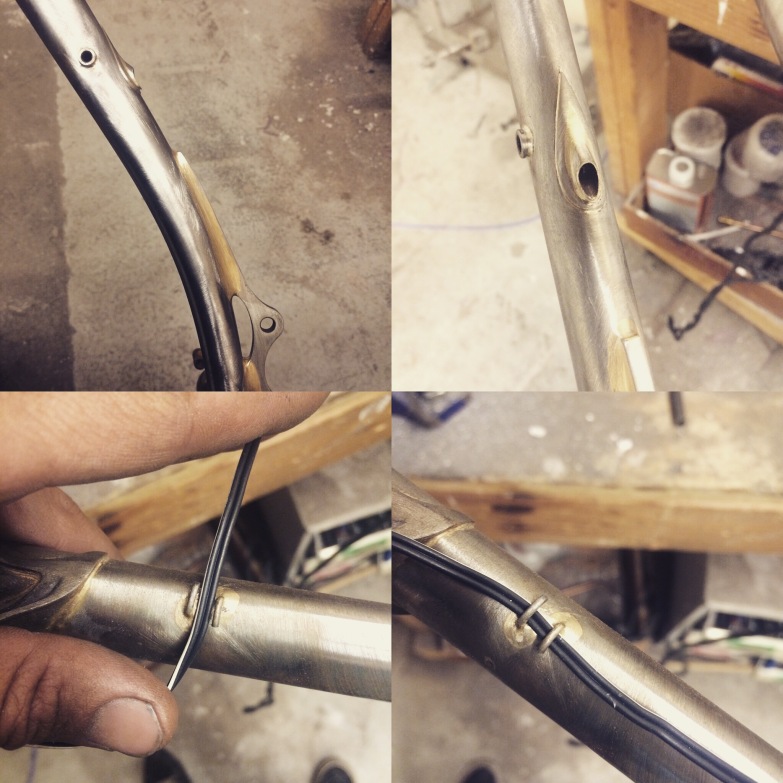 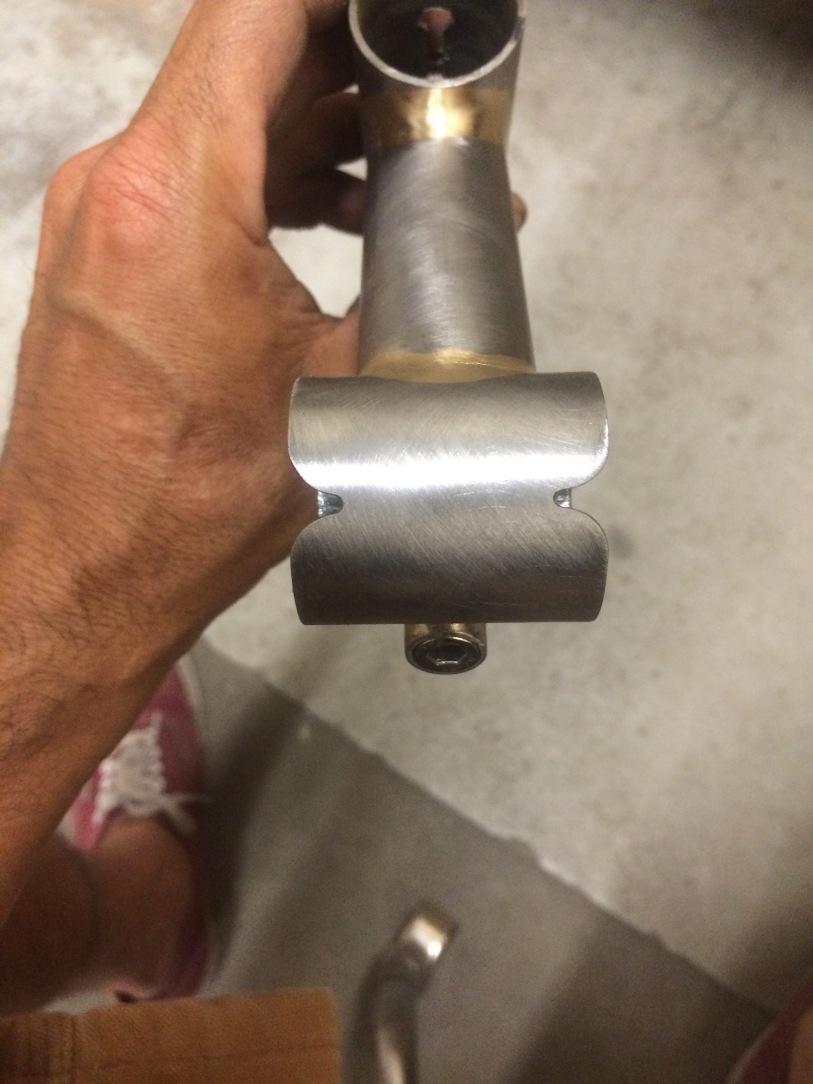 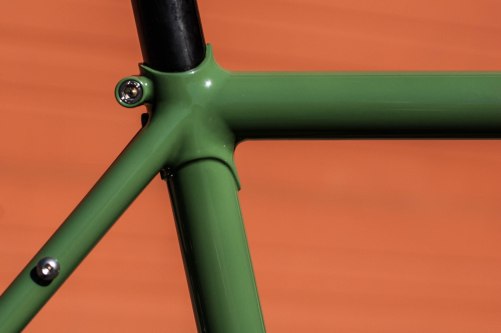 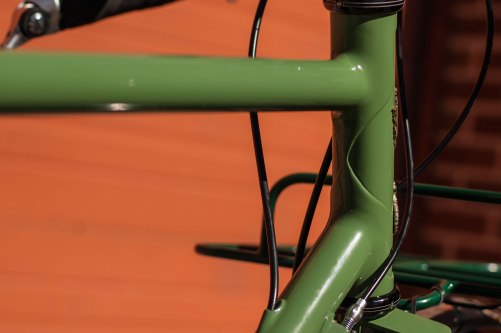 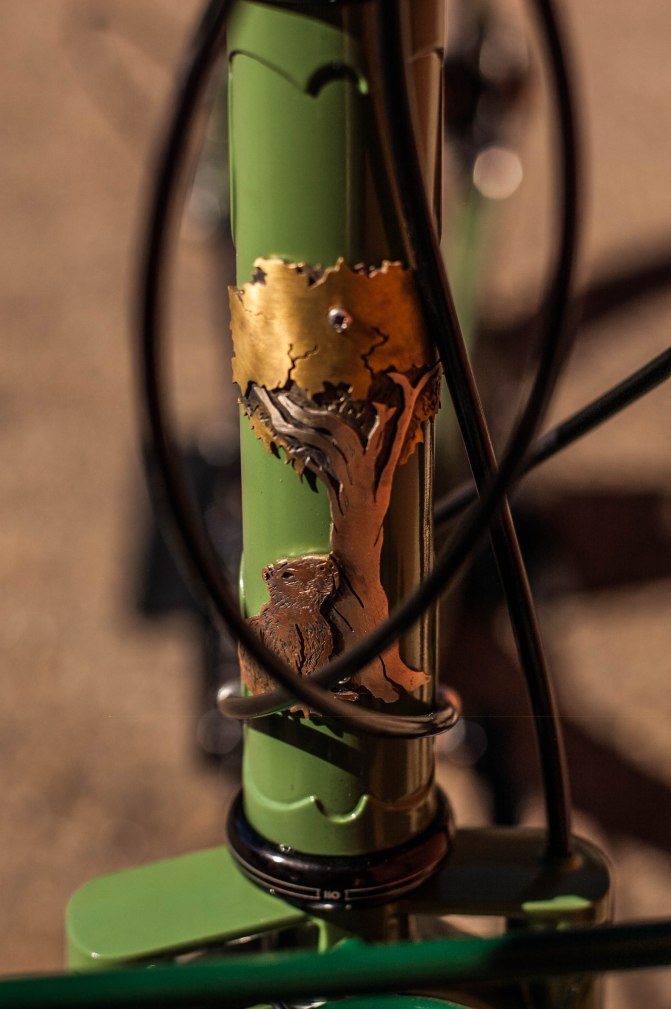 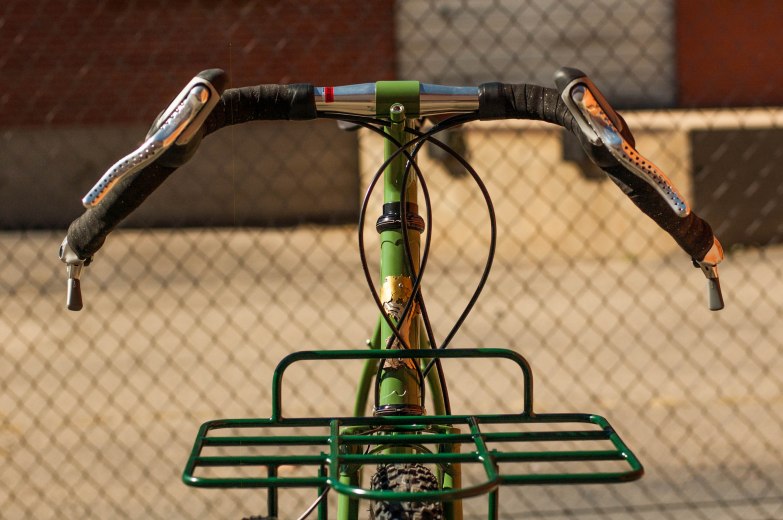 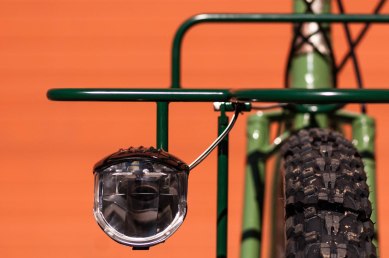 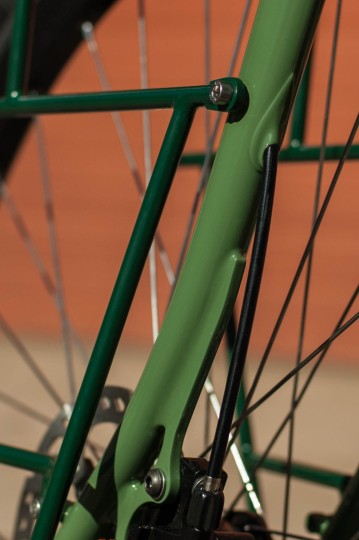 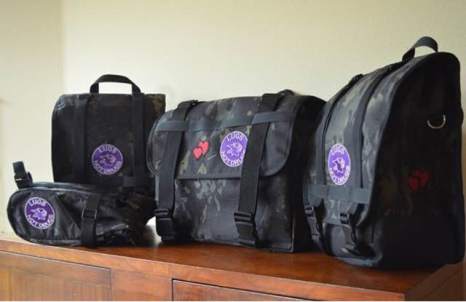 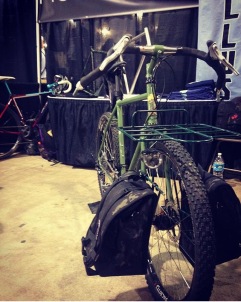 Photos of the bags by Ely Rodriguez. Photo of bike by Frank Rotondo.