Last weekend was the 3rd annual Texas Custom Framebuilders in Austin, TX. I would say that it was a fun and successful event. Its always a little stressful getting things organized for shows, but once you get set up a good time follows. Its weekend all about bikes, and beautiful, well crafted bikes at that. How could it not be a good time?

There was a lot of familiar faces among the visitors, so it was great catching up with people I met last year and meeting some new people this year. I’m better remembering faces than names, so I apologize in advance for any mix-ups.

I was discussing the show  Glen Thompson, who is both the organizer of the show and the builder of Daltex bicycles. We both agreed that its not just bike enthusiasts that come out to the shows, but bike enthusiasts with very refined tastes; a niche within a niche. “Cognoscenti” as some with exceptional vocabularies would refer to them as.

Unfortunately I was so wrapped up chatting with folks, that I did a horrible job of taking photos. I did not take a single one. Sorry. Hopefully there are some floating around on the web.

However, with some of the bikes still in my possession after the show, I was able to arrange a photo shoot with my friend and rad photographer Nick Prendergast. We are still editing the photos, and they will then go on to the website, so I dont have those to show y’all, but here are some behind the scenes photos of Nick working his magic. 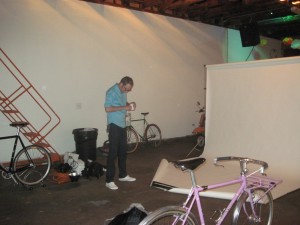 We were able to do the shoot in  some friends’ artist warehouse/event space. It was a welcome change of venue then my vacant bedroom we used last time…. 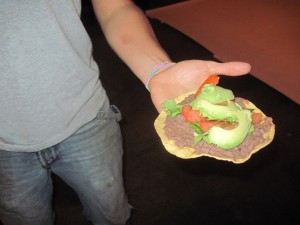 It was a pretty relaxed atmosphere. I spent sometime polishing up the bikes, and Nick was busy setting up and taking the photos. A few friends popped in to hang out. LT provided the catering, yummy tostadas and we enjoyed some beers. 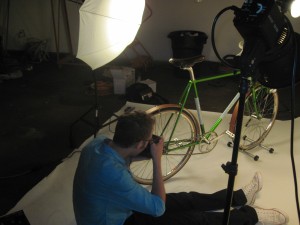 Be sure to keep an eye out for the new pics on the full site. But I’m sure that I will let y’all know when they are up.

In addition to the photo shoot I squared up a few designs for up coming and pretty rad builds. Now I am getting the last of the materials together before starting them. I also finished a few small projects around the shop.

Next week I will hopefully get a good start on these new builds. However it seems like this is turning out to be a crazy month for travelling and bike shows as I will be heading to Philadelphia at the weekend for the Philly Bike Expo.

Though its a bit soon after the Austin show, which leads to quite a few days out of the shop, I am very excited about going to Philly and being apart of the Bike Expo. I have never been to Philly before and the exhibitor list looks pretty impressive. The show also looks very well organized with lots of fun side events going on in the evenings.