I could tell it was going to be an interesting day on the bike as I drove my house mate’s truck from Denver to the starting location 30 miles north in Longmont, CO. Not only was it my first brevet as a Rocky Mountain Randonneur and first big ride in the mountains, but I was already exhausted having suffered through a rare and unexpectant sleepless night. Was it anticipation of the ride that had kept me up all night? I don’t think so, I had no mental images to play in my head as this was unchartered territory. Was it my insistence to forgo a bed for the time being and sleep on the floor in some idealistic attempt to “live minimal” and possibly  harden up a little after years of my cushty lifestyle in Texas? By now I was quite used to the floor, so maybe not. Whatever it was, my muscles already ached from the lack of sleep. This ride would mark my 4th season as a Randonneur, by now I had certainly done longer rides on less sleep, I knew I could slog my way through just about anything. But what if the Mountains had other plans for me?

Spring had taken its sweet time to arrive in Colorado. It had been snowing only a couple days before the event,  but today would be the first warm day with a forecast in the 70’s. Not knowing what to expect when we hit higher elevations I packed several layers and even multiple gloves.
There was a great turn out of 30 or 40 riders at the start, all on very nice bikes. At 8 a.m. we rolled out. A quick lead group took off with absolutely no hesitation or intention to conserve energy. I knew it was utterly futile to try and ride with them. I hopped in with the 2nd group that were starting with a slightly more sensible pace. I figured it would be good to meet some of the people in my new bike club and in my tired state riding with the group would help me preserve energy.

Only a couple miles down the road, my choice of multiple layers was already proving to be a bad choice, so I stopped to take off my long sleeve jersey. I figured this would not take very long and I could easily catch back up with the group. I then tried in vain for at least 20 minutes to bridge up with them. I got close, but once we started hitting the traffic lights in the town of Berthoud my chances were over as I got stopped at a couple of lights. A long solo ride it would be. Probably for the best anyways, as my tired state would have most likely produced some rotten chat on my part.

After leaving Berthoud,a couple turns right and a couple turns left saw the country road starting to rise up into the foothills. The cloudless sky strangely felt lower than normal as I was now reaching some real altitude.  With winter only departing recently, the landscape lay brown and barren. Naked canyon walls added to the openness. If this was back home, riding alone for hours or days in such an open expanse would  induce a deep sense of solitude and reminders of how small I/we are in comparison to the world around us. There were whole roads that I used to avoid because their aura was too overwhelming. But this was in the heart of  cycling country, and even within the vastness of the scenery one could not ride for more than 5 minutes without seeing another cyclist.

The scene was near comical as I approached the hills of Horsetooth Reservoir, just west of Fort Collins. Hordes of cyclists were either barrelling down the descents or huffing and puffing up the climbs, single file, like a mass of lycra clad lemmings. I could not believe the sight. Where was I? The randonneurs were spread out by this point, and there was no big bike rally going on, instead it was most likely just a typical Saturday with hundreds of people riding up and down these aggressive hills.

Surprisingly I survived all of the climbs. Near the top of the last one I caught up with the club RBA, aka club president, John Lee Ellis. We chatted as we made our way to the next control. It turns out that he was originally from Fort Worth as well, though it was obvious  he had been living in Colorado for a long time as he was extremely strong on the climbs.

We made it to the control in Bellevue. John headed off a little bit before I did. Before departing he told me I was in for a treat riding through the Poudre Canyon  during the next leg. This was an understatement. The red canyon walls hugged the road, each bend brought even better sights. The layers, fractures,colors and patterns that formed in those sandstone walls proved that Nature was the ultimate bricklayer. 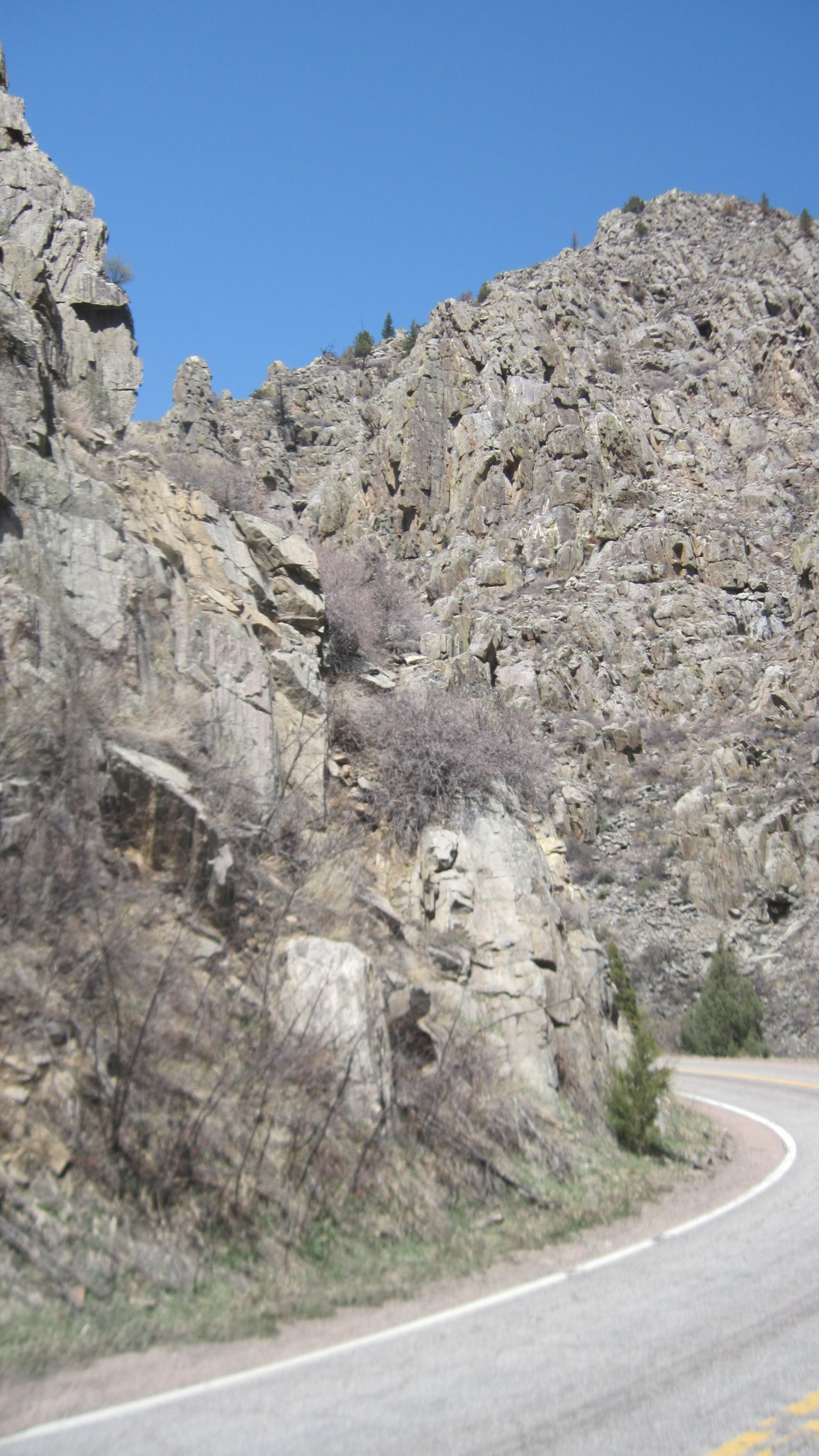 Nearly towards the end of the Canyon, I went through the small town of Mishawaka. Most notable for their bar and ampitheatre that serves as a Northern Colorado Hippie Outpost. I stopped in to fill up my water bottles. The bar tender offered me a beer, but I declined as I knew another big climb was approaching. Though, I think I’ll take that pint next time I roll through the Canyon.

Back on the bike, I soon found myself turning onto the road taking us to Stove Prairie, the highest climb of the day. I managed fine in the beginning, but soon the previous climbs, lack of sleep, totally unsuitable gearing, lack of mountain legs and lungs caught up with me. The elevation kicked up ever so slightly and I was done. I looked over my shoulder and didn’t see anyone else, so I stopped, and shamefully got off my bike and began to walk. When it flattened out slightly I got back on and pedaled, but it was not that much later that I was walking again.

Half way up the climb the landscape opened up to a lush mountain meadow. A few hearty looking cattle peacefully grazed as brightly colored exotic-to-me birds flew by. I was still questioning the reality of this country, as I had been for the better part of the day.  After a couple more sessions of bike/walk/bike/walk I approached the top of climb and next control, a single building elementary school, on top of a mountain, elevation 7,440 feet.

I rested and ate a Cliff bar, pondering what it might be like to be a child going to school on top of a mountain. It was unfathomable. I didn’t rest for  too long because it was all down hill from here. I got back on the bike and smiled the whole way down the 10 mile descent.

The route joined up with some of the roads we were on earlier, but luckily bypassed the steep hills of Horse Tooth Reservoir, I was certainly done climbing for the day. I rambled along, still passing or being passed by hundreds of cyclists. Soon this long, near magical, day came to an end as I approached the final control and was greeted by a few of the other randonneurs. I had survived my first day in the mountains. Barely.

3 thoughts on “The Lemming with the Sprocket: Stove Prairie 200km”